Historical Shooting Inc held a WW2 "Battle of the Bulge" themed shooting competition on a cold, snowy Sunday in the NH woods
There was a particularly messy snowstorm the day before the event, but we still had some stalwart attendees who braved the snowy roads to come out to our first official event.
For this event, all entry fees were waived.

Each particiapnt was issued a satchel containing the ammo for the event, a mess kit with utensils and a P38 can opener, and some field rations.

Participants were led along a trail through the woods to several station where they encountered different scenarios requiring the firing of different weapons. Some of us were wearing steel pot helmets, some were in various degrees of military uniforms, and Bob was dressed head-to-toe in the uniform ofr a 26th "Yankee Division" infantryman as he would be equipped in the WW2 European theatre of operations. 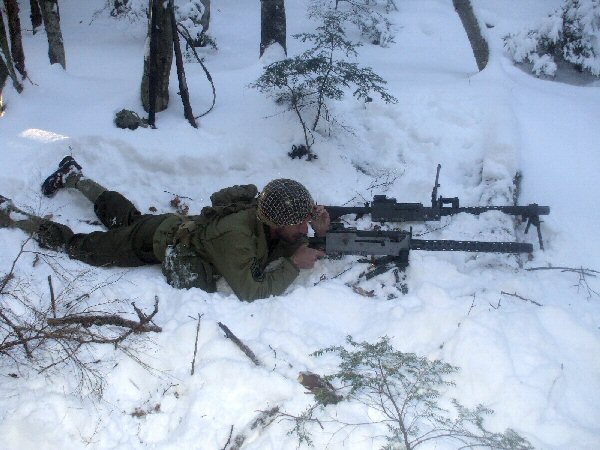 The Light Machine Gun Scenario
The first scenario was to fire a pair of Browning 1919 .30 caliber belt fed guns at a row of targets partially concealed by brush. Each shooter got to fire 15 rounds of .308 out of either a Browning 1919a4 or a 1919a6. The snow was deep enough that the gun's tripod disappeared into the snow and shooters found themselves wallowing in the snow trying to aim at the targets. Overall, the squad shot very poorly in this phase, we'll need to study why.

The Pistol Scenario
For the second scenario, the particpants spread out in a firing line across the trail to engage a line of targets ahead of them. In this phase, everyone got to try a 1919a1 .45 caliber pistol, a 9mm P38, and a .32 caliber Walther PP. There was also a French "Unique" .32 automatic pistol along on the trip, but it had a magazine problem and was withdrawn from the event for repairs. 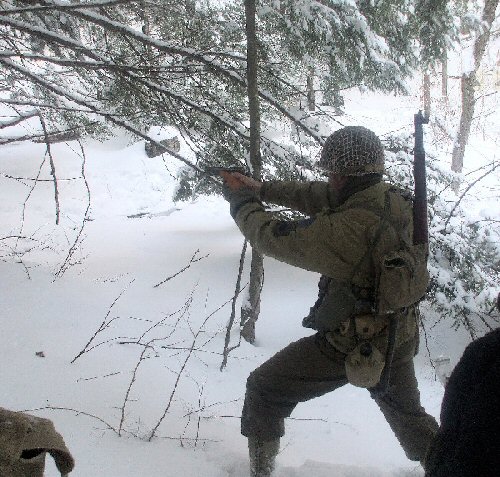 The Rifle Scenario
After shooting their way past the pistol targets, the squad continued across a ravine and through the snowy woods to the base of a fairly steep hill that had to be climbed. Upon reaching the top, someone spotted the targets for the next rifle scenario. For this one, shooters were allowed to pick whatever shooting position they wanted to fire on the targets that were approximately 100 yards away hidden in the woods on the other side of a steep ravine. For this phase, participants had a chance to fire k98 Mauser bolt action rifles, 1903 Springfield rifles, and an M1 Garand rifle.

To add some stress and confusion, not everyone was carrying the proper ammo for the rifle they were issued. This was by design, as was setting up the shot so that it was immediately after the squad having to climb the steep hill in waist deep snow while carrying a rifle, rations and gear. To be able to shoot, particiapnts first had to scramble to get the proper ammunition for their rifle. "Who's got 8mm?!?!" When someone shouted that they did, that meant more scrambling in the snow to get the ammo and back to their shooting position. "Who's got .30 cal?"

Some good shooting was done on this phase of the trailwalk. Because of the way targets were positioned, some of the targets were hard to see from a comfortable shooting position. For instance, Bob's target was only about 1/4 visible through the crotch of a tree. He shot a 26 with 12 hits in the X ring out of 26 shots. We all gathered around to watch 13 year old Mitchell fire an M1 Garand for the first time. It's one of those "rite of passage" moments that were thankfully captured on video.

The Carbine Scenario
By now everyone is cold and covered in snow. Fingers are numb. One guy is bleeding from a cut. It's getting to be late in the day and shadows are growing. We made our way down the cliff and out onto a logging road that led us to the last encounter. We turned down a trail to a copse of hemlock trees that had kept the snow from getting too deep underneath them so we had a fairly comfortable place to shoot from for the carbine phase.

For this phase, participants got to fire a .45 cal M1 Thompson carbine and an M1 Carbine. Once again, the targets were partially concealed behind brush and because of the trees and rapidly fading light, it was a bit tricky to figure out exactly which target to shoot at. One of the M1 Carbines, a newly restored Rock-Ola, had a problem with an empty shell getting stuck in the chamber, so it was taken out of action. The other one was a transferable M2 (an IBM), the select-fire version, and a couple of the participants felt compelled to flip the selector switch and try to fire at the targets in full-auto.

Some respectable shooting was done in this phase as well. Because of the low-light and brush covered target confusion, Kari even ended up with an extra hole in her target. This event was Kari's first time shooting centerfire guns, but she held her own.

After heading back indoors, we got out our rations and had a quick meal of nearly frozen canned meat, hardtack-like crackers, a chocolate bar and a lemonade packet added to our water bottles. Cold meat on a cracker tastes pretty good after an afternoon out in the cold. We took this opportunity to discuss first-hand accounts as told by WW2 veterans who actually fought at "The Bulge" in the winter of 1944-45. It is in their memory that we hold events like this.

Each participant fired a total of 80 rounds at four targets through nine different guns. Some of the guns were personally owned by the participants, others were provided by Historical Shooting inc. There were some commonly encountered guns and some not-so-common ones. A shoot like this is a good opportunity to try out things that the typical shooter would not have a chance to because of rarity or cost. If we include the privately owned guns along with the weapons provided by HSI, each participant in this unique event got to handle, examine and fire approximately $16,000 worth of vintage historic firearms.


First place got to pick first choice of two sets of art prints of painting done by GIs and war correspondants during WW2.

Second place got the remaining set.

Third place got a Battle of the Bulge commemorative poster.