I recĺd the melancholy news in the morning that General Gageĺs troops had fired on our countrymen at Concord yesterday and had killed a large number of them. - Matthew Patten, April 20th, 1775 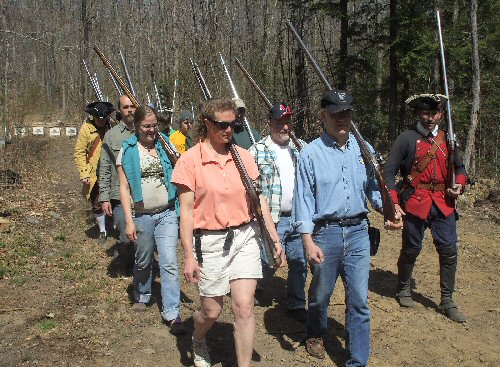 On the last Saturday of April, 2010, Historical Shooting Inc. held an 18th Century style muster and town meeting to showcase the weapons and technolongy of 1775.

Participants in this unique event had an opportunity to learn about, handle, drill with and fire flintlock muskets of the type used in the opening days of the American Revolution.

The event began at noon, when we held a "Town Meeting" at which we heard the shocking news that the British Regulars had marched on Concord on April 19th. At the meeting, we had the to take care of the important business of deciding what to do. Should we call up the militia and send them to help our brethren to the south? Should we do nothing and wait for more news? What about our spring planting? If we go off to the war in another colony, who will take care of our farms? Is sending the militia out against uniformed British troops an act of treason? If we send our men of fighting age off to Massachusetts, who will protect our homes and families if the Regulars were to come here? 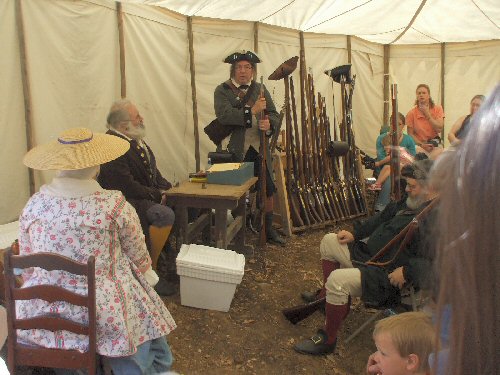 Many points of view were considered, but ultimately it was decided to not send our men off to the Bay Colony for now. According to the reports that we read, the Provincials in the bay Colony had dramatically outnumber the Regulars and had them bottled up in Boston. What was decided instead was to prepare for our own local defense should the trouble in Boston come here. It was also decided to not make a formal record of our meeting in case this all ended badly.

In 1775, the town held this meeting on May 15th, nearly a month after the hostilities at Lexington and Concord. The meeting in 1775 was held at an undisclosed location and the records of it (who was the moderator etc) are conspicuously absent from the town's official record books. We were a bit more open about our meeting in 2010.

After the meeting was adjourned, a call went out for volunteers to join a local Provincial regiment. Nearly two dozen people stepped forward, but most were found to be sadly lacking in arms and ammunition. Those who wished to drill were issued muskets out of the town stores, those who wished to practice live firing were issued ammunition as well, but fined $10 for appearing at muster without being properly equipped. 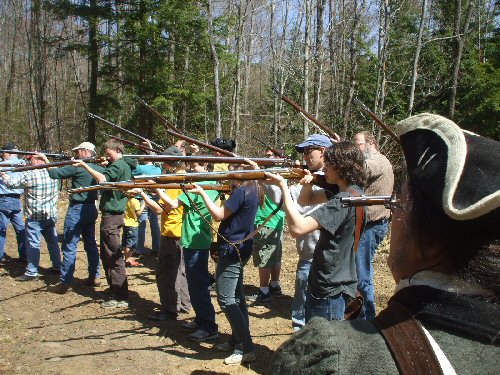 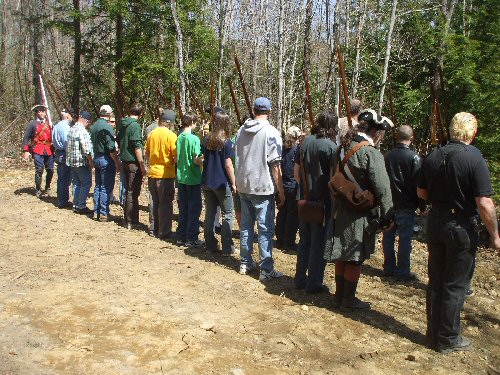 Sgt. Winer of the 3rd Massachusetts Provincial Regiment took the volunteer company through basic marching and musket drill until they began to give the appearance of a military unit. Once they appeared ready, the company was divided up into four squads for the live-firing exercise. 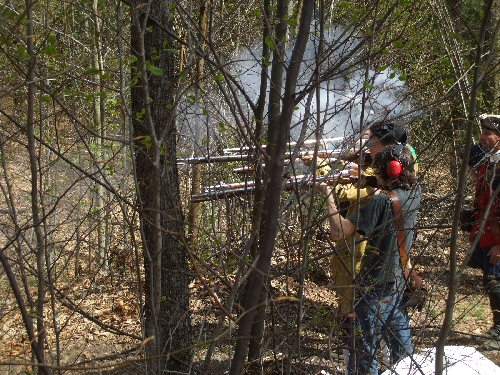 After the musket exercise was over, we rolled the 3-pounder cannon up to the line to demonstrate firing grapeshot.

By now, most of the party had dispersed and folks not from the immediate area stayed overnight. On Sunday, we did more shooting, this time with some historic guns from the 20th century. After that, we formed an assembly line of sorts to clean the dozen or so muskets that were used for live firing the day before and oiled them well before putting them back into storage. 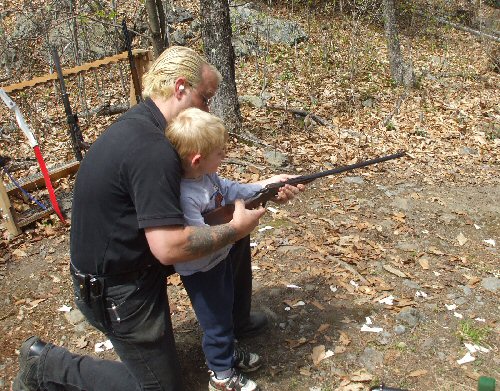 This was the 3rd formally organized Historical Shooting Inc event. With each event that we hold, there are a few new lessons learned that serve to make the next one better.

We couldn't put on an event like this without the help of many hands. Planning for this began over the winter, and the weeks leading up to the event were crammed with preparatory activity. We held a work party weekend in early April during which Bob and Terrell came out to help clear and flatten a spot for the big marquee tent and set it up. Earl used our tractor to expertly clear and flatten a spot big enough for drilling on over the course of several days filled and flattened a nice area where the little kids who were not as interested in the militia training could play. Kathy made the great "no smoking" signs. Katie did a lot of general site cleanup. Wendy rolled over 500 musket cartridges. Betty caught a ride from her home in Vermont to help out by demonstrating some 18th century skills such as flint and steel fire lighting and drop-spinning wool. Lynn and Lenny brought cold drinks for everyone to share.

I'm sure there are more people to thank, but the point here is that a good event is in the hands of many people. If you are interested in a particular time in history and would like to help us bring that moment alive, please let us know!